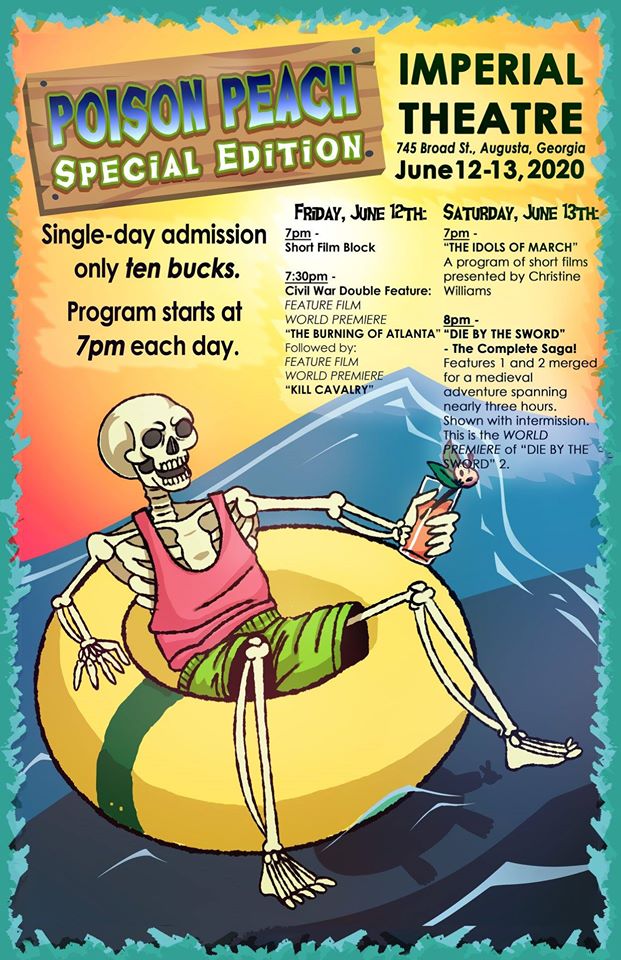 We have so many fabulous films in Augusta that we had to create a special summer edition of the Poison Peach Film Festival! The program begins at 7 pm both days, both nights are family-friendly, and only $10 admission each night.

Friday night opens with a short film block, including Jezibell Anat’s music video for Brave Boys in Gray, followed by two Civil War feature films by Christopher Forbes. The Burning of Atlanta is about the famous fire in the warehouse district, and Kill Cavalry tells the story of Union General Judson Kilpatrick, nicknamed “Kill Cavalry” for his reckless battle tactics.

Saturday night opens with The Idols of March, an anthology curated by Christine Williams showcasing fifteen local filmmakers. Our feature presentation is the complete saga of Die by the Sword, an epic tale of battle and magic in Dark Age Britain, written by Jezibell Anat and directed by Christopher Forbes. Based on pre-Arthurian legends, Die by the Sword tells the story of King Vortigern, whose realm is under assault by the Picts from the North after the Romans have left. To help him protect his land, Vortigern brings in the Saxon chiefs Hengest and Horsa, along with the sorceress Rowena, with disastrous consequences for the Britons. Fortunately the old Druid Myrddin and the Guineveres retain their ancient magic, and two young boys grow up to become heroes.

Please join us for two exciting evenings of local independent filmmakers. The directors and casts will be there as well.