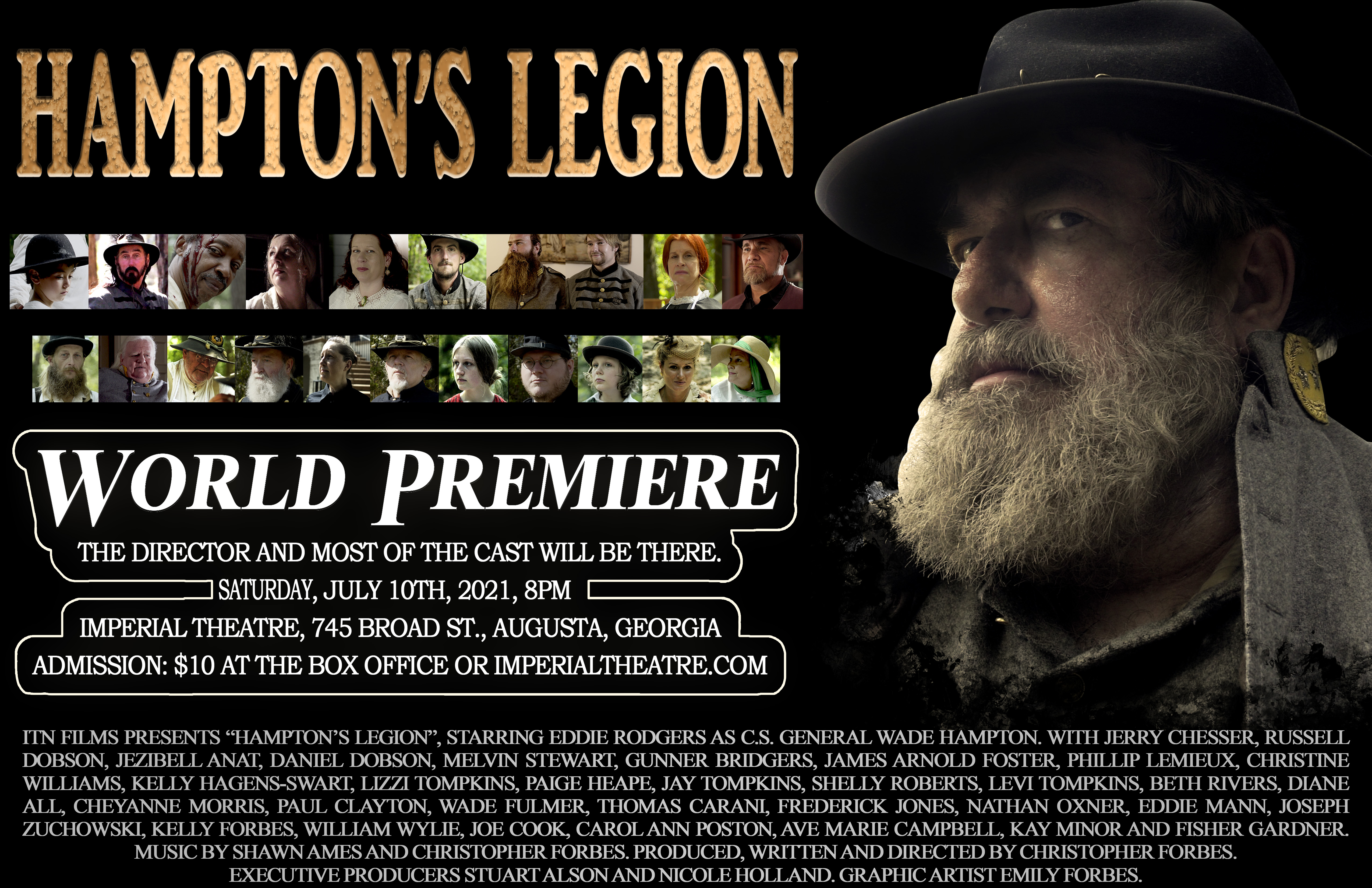 Poison Peach, now in its 13 year, is a festival of local independent film. Friday night is adult oriented, presenting Joseph Zuchowski’s the short Swing Low, David Axe’s feature BaeWolf, and the world premiere of Christopher Forbes’ WWII feature Rocket Hunter: Rise of the Nazi Rockets. Saturday night is family-friendly, starting with a short block including The World Is Full of Weeping by Jezibell Anat, and the world premiere of the Civil War film Hampton’s Legion by Christopher Forbes. Individual Day Tickets are $10, Weekend Tickets are $20

A troubled young woman (Tarynn Stineman) is visited by a very unusual social worker (Joseph Zuchowski). This is the screen version of a play that was in Le Chat Noir’s Quickies.

7:30 pm Rocket Hunter: Rise of the Nazi Rockets, written and directed by Christopher Forbes of Augusta. In the last desperate days of World II, the Germans create and launch a rocket plane. Starring Charles Gable, Jezibell Anat and Joseph Zuchowski, and is dedicated to the memory of the late Eric Miller.

9:00 pm BaeWolf, written and directed by David Axe of Columbia, based on the Beowulf legend, with a female lead (Jennifer Hill). In the year 500 A.D., a jealous, decapitating monster terrorizes the drunken revelers of Heorot.

7:00 pm The Idols of March, a collaborative project created by Christine Williams of Augusta, a series of short films inspired by figurines.

“Little Box of Horrors” by David Axe. A collector of odd and eclectic items gets more than he bargained for.

“Perfect Timing” by Josh Rabalais. A young man is presented with an impossible choice.

“Seecrets” by Chuck Corbin. The call of the forest is heeded by two young ladies.

“Sound of Forever” by Eric Poe. When things don’t work out between a couple events suddenly take a much darker turn.

“The World is Full of Weeping” by Jezibell Anat. Memories of a better time creep into a melancholic woman’s mind and lead to an astonishing discovery.

“FLY OFF!” by David Frantz. By assisting his father to restore a plane an eager young man learns about patience.

“December” by Christine Williams. A long-awaited reunion between childhood friends doesn’t go quite as planned.

“A Dayo at Home” by Wendy Miklos. Based on a true story: When a good friend has a near fatal accident his buddies pull together to cheer him up in an unusual way.

“Moss Toffles – Brownies on the Loose” by Sherman Gills. Learn about tall legends and tiny people in this adorable tale of bravery.

“Sarabande” by Joanne Greene. A gentle Lady shows off her antiques to an unknown audience and divulges more than she intended.

8:00 pm Hampton’s Legion, written and directed by Christopher Forbes. The exploits of South Carolina General Wade Hampton, who financed his own army, and those who followed him. Starring Eddie Rodgers, Jezibell Anat, Jerry Chesser, and many Georgia and South Carolina actors and re-enactors.

9:30 Ghosts of EastWind Castle, written and directed by Sherman GIlls of Trenton, South Carolina. In the process of establishing a modern medieval village, a couple has brought over some European stones that are haunted by ghosts and witches from various eras. Starring Alyssa Amelia, Mary Troutman, Joseph Zuchowski and an eclectic cast from South Carolina and Georgia.